How Germany’s LNG Terminals Will Morph Into Green Hydrogen Hubs 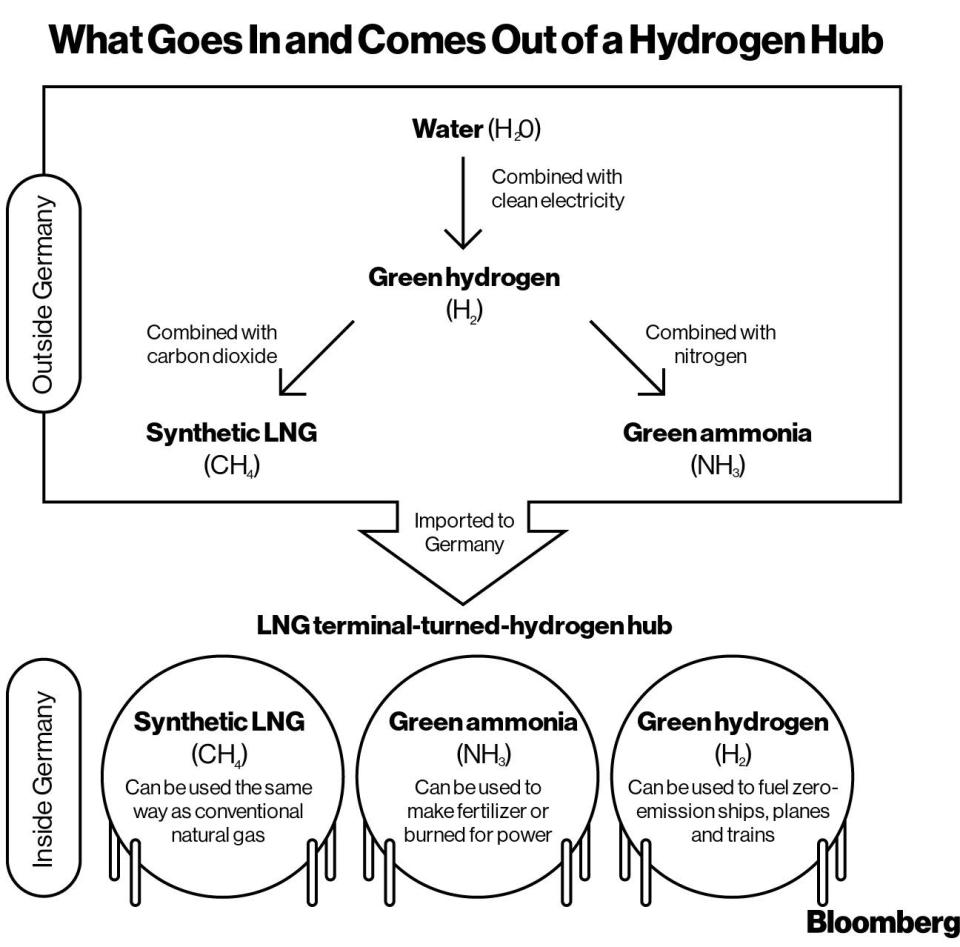 Germany plans to abandon fossil-fueled power by 2035. But instead of shutting down natural gas infrastructure, it’s speeding up construction of several new terminals that will allow companies to import the planet-warming fuel by ship for decades to come.

The plans are aimed at breaking Europe’s reliance on gas piped in from Russia, of which Germany is the biggest buyer, after its invasion of Ukraine. Because land-based terminals take several years to build, the government has also rented floating facilities that can start receiving liquefied natural gas as soon as this year.

To reconcile the rush to procure gas with the government’s ambitious net-zero plan, Germany wants each of the proposed terminals to eventually handle carbon-free fuels imported from countries such as Australia and the United Arab Emirates. The compromise allows Germany to address the current energy crunch while planning for an emissions-free future. Companies can import LNG for a few years to make up for the loss of Russian gas, then use some of the same infrastructure to handle green fuels that can power grids and heat homes. But the mechanics of making that switch are complicated, and, at this stage, largely theoretical.

“The very short-term action is to reduce the dependency on Russian gas,” said Han Fennema, chief executive officer of Dutch state-owned gas network operator NV Nederlandse Gasunie, which has invested in one of the new German terminals. “I think the second phase will go quicker than expected with green hydrogen.”

The new German terminals will be built to receive LNG — gas that has been chilled to -160 degrees Celsius (-260 Fahrenheit) so it becomes liquid. When vessels arrive at the jetty, the cryogenic fluid is sucked out using pipes designed to handle super-cold temperatures and delivered to special storage tanks. Before being shipped out, the liquid is heated so it turns back into gas, sometimes using seawater as a conduit.

Almost none of the equipment used to do this is suitable to handle hydrogen, which is more difficult to store and transport because its molecules are much smaller than the methane that makes up a large chunk of natural gas. It’s true that hydrogen can also be moved as a liquid in ships, but the gas has to be cooled to an even lower -250°C, requiring completely different vessels. Storage tanks, the most costly component of any LNG terminal, are no good at holding tiny hydrogen molecules. Not all pipelines can handle pure hydrogen; it can weaken the metal structures and cause leaks.

“The conversion of a LNG terminal to liquid hydrogen is a technical challenge,” said Arno Buex, chief commercial officer at Flyxus, which operates an LNG terminal in Belgium. “An economically viable business model… is far from imminent.”

An easier way to move hydrogen around is to convert it into ammonia, which easily liquefies at -33°C. The compound, made up of nitrogen and hydrogen, acts as a carrier for the latter. Ammonia can be burned for power or used to make fertilizers, or converted back into hydrogen fuel. The same tanks and pipes used to handle LNG can work on ammonia, and the costs of tweaking an existing terminal would be just 15% of what’s needed to build a completely new facility, Buex said.

That approach, however, brings a new set of problems. A terminal’s cryogenic pumps would need to be replaced to handle ammonia and, if customers want hydrogen instead, operators have to install crackers to break the compound down. The conversion between the two compounds is also extremely energy intensive, meaning companies have to find vast amounts of clean power to ensure the process is zero-emission.

That’s why most of the planned LNG terminals in Germany are proposing a third option in the interim: importing a fuel known as synthetic LNG. To make it, hydrogen is combined with carbon dioxide — either captured from factory smokestacks or created as bio-waste decomposes — to form methane, giving it an identical chemical composition to natural gas.

The man-made methane can be easily transported and used in existing networks, or turned back into green hydrogen and used to decarbonize sectors such as steel production and transport. That process will produce CO₂, which can be captured and shipped back to the source, where it can again be fused with hydrogen to produce more synthetic LNG, creating a closed loop that doesn’t release carbon into the air.

TES, which is developing a 2.5 billion-euro ($2.6 billion) clean energy hub in the town of Wilhelmshaven along Germany’s North Sea coast, says the terminal will start receiving shipments of conventional LNG from late 2025 and that it can, at no extra cost, move on to processing zero-emission synthetic methane from 2027. By 2045, the company plans to import enough green gas to produce more than 5 million tons of hydrogen, the equivalent of about 10% of Germany’s total annual primary energy demand.

While the hydrogen market is still too small to match TES’s ambitions, a nearly 450% jump in European gas prices the past year has made the green fuel cost-competitive with fossil fuels about a decade ahead of schedule, according to clean energy researchers at BloombergNEF. Part of the EU’s plan to get off Russian fossil fuels involves providing more support to the sector.

“On hydrogen, we have to do everything that is possible to accelerate,” said Stefan Kaufmann, an official at Germany’s Federal Ministry of Education and Research. “We have to work on global supply chains, on fast regulation,” he said. “The war has shown us that we need to be much faster than we thought a year ago.”

Other companies are also expecting the market to get a boost. Uniper SE revived plans to build a floating LNG import terminal in Wilhelmshaven, which would become part of a green hydrogen hub already in the works. The German LNG Terminal in Brunsbüttel plans to eventually import carbon-neutral synthetic LNG. RWE AG says it expects hundreds of millions of euros in investment in its Brunsbüttel terminal, where about 300,000 tons of green ammonia is due to arrive as early as 2026.

The Hanseatic Energy Hub in Stade wants to increase its share of synthetic LNG, and, as global supply grows, switch to bringing in green ammonia, according to Buex from Fluxys, which owns shares in the terminal. “There’s no risk of a stranded asset,” he said.